To take Hex EA for the Allies, I'd need to overcomeKeith Backland in my next installment in Operation Breakout, at Justplay Games in Liverpool on their wonderful Krypton factor board. I've faced Keith twice already, and his force choices are always out of the norm...

When Keith showed me what I was facing, I was less than impressed to say the least, mainly because I'd never faced it, or if I had it was a long time ago and didn't really understand why Keith was getting so much free stuff when the points were the same. Fortunately, Keith patiently persevered and explained and I wound my neck in a bit and cracked on...

Keith was defending the Hex, and picked a force accordingly. We rolled Demolition, and Keith got to choose the board edge, surprising me by taking the open side with fewer buildings (It was before I'd seen his list).

My force consisted of the following, all regular except the veterans:

Keith's Atlantic Wall force consisted of a dual platoon with the following:

And 6 Bunkers and a healthy dose of barbed wire...

As I said earlier, although my friend Rich had done an Ostruppen force from Atlantic Wall, it was 3 years ago and not sure I faced it. It certainly didn't have so many bunkers but what the hell, if your going to crack a nut, might as well crack a tough one. The big box crates were the objectives to demolish.

As you can see below, Keith deployed his bunkers in the open fields, and the bulk of his barbed wire of on the flanks to discourage outflanking. (I'd already decided not to as the objective was central. With half on and half off, Keith deployed both light howitzers (in the second and fifth bunkers going from the left) and the 4 Kriegsmarine units in the remainder...

I decided to deploy the mortar and howitzer, flame thrower and some regular units and rush the right side of the large central hill under cover of smoke. Of course, the hedges wouldn't help with the speed of my attack, but it would give some cover. I deployed my sniper to good vantage on in the church tower. 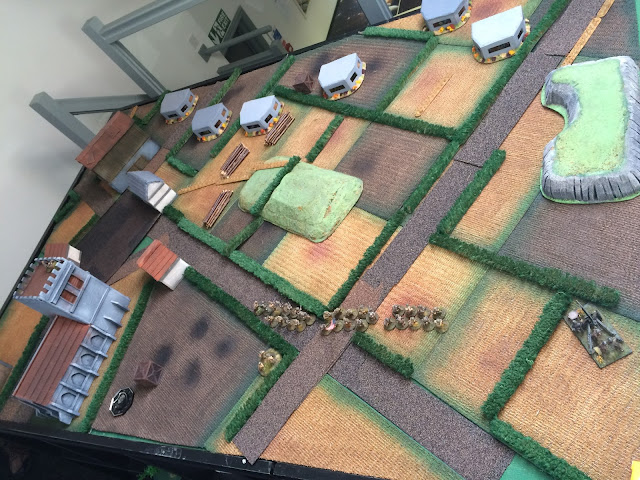 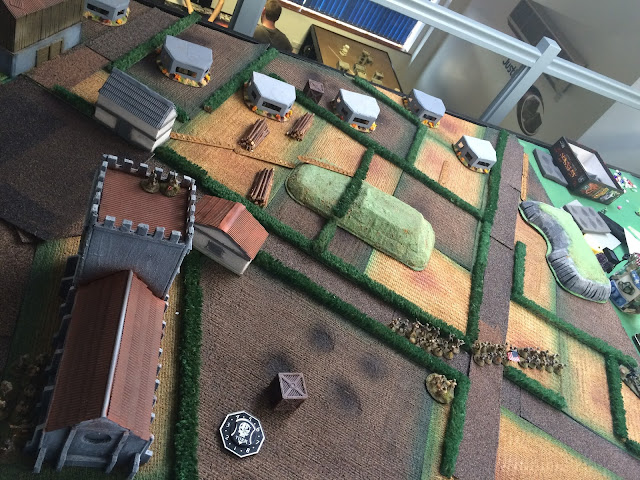 Not a great deal happened, except the mortar and medium howitzer dropped smoke (the 4 purple dice squares). One of the veteran howitzer's took out my mortar and the second killed half the crew of my howitzer, but they stayed put. My sniper took out an LMG in the 3rd bunker, while on squad on the right ran up the road and the other units crossed into the fields, loosing some BAR shots that pinged off the bunkers. 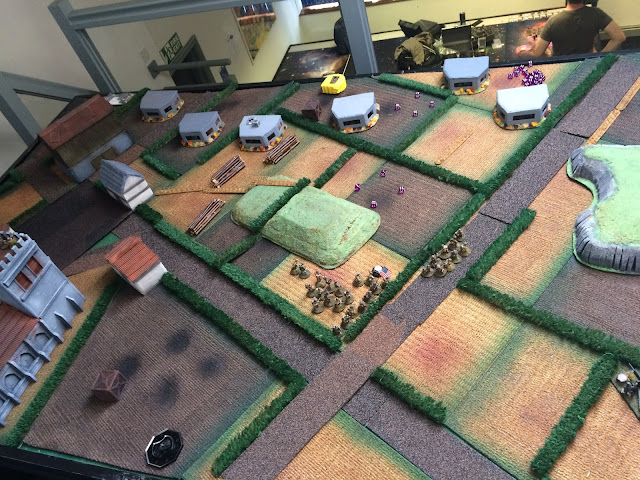 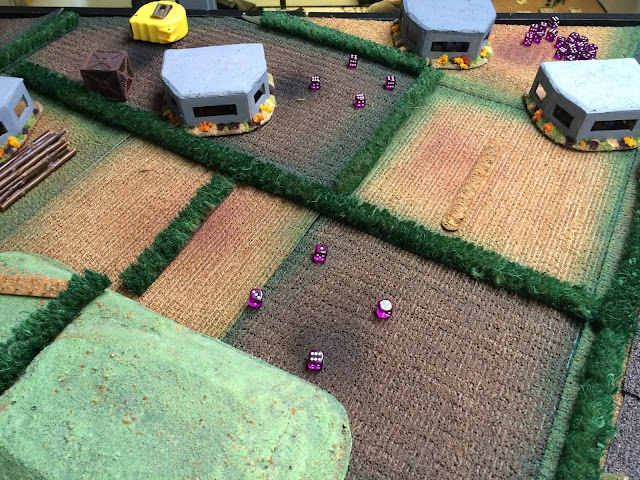 The smoke stayed where it was, the sniper missed the LMG in bunker 1 and the reserves started coming on with the US officer coming on to allow the medium howitzer to drop more smoke. One US veteran squad stayed off by rolling 11, but everyone else came on bar three outflanking German units. 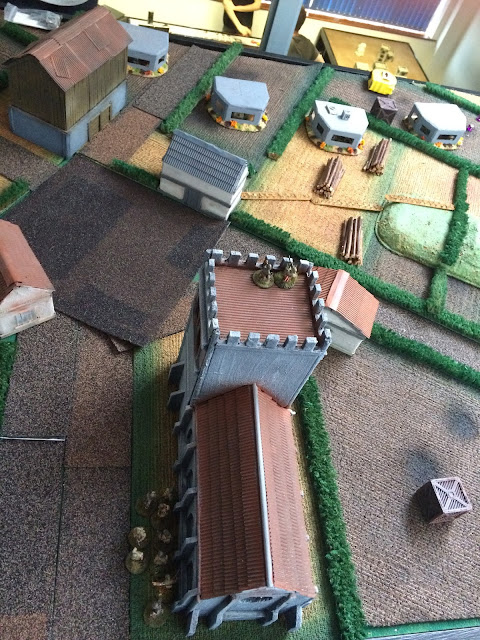 3 regular GI units advanced over or around the hill, veterans from reserve ran up behind them on the road, the 222 came on and missed the veterans then took a pin due to being open-topped from the regulars by the church. The other veterans came on nearer the artillery to help against outflankers and the BMW driving up and down the road. The german sniper ran up behind bunker three. The last two dice were left for the Kreigsmarine in bunker 4 and the US flamethrower. The German dice came out, and went on ambush so the flamethrower ran up and over the hill, hoping to survive and be ready for first dice next turn, but sadly the Kriegs lads killed one man, and the flamethrower decided to run away... 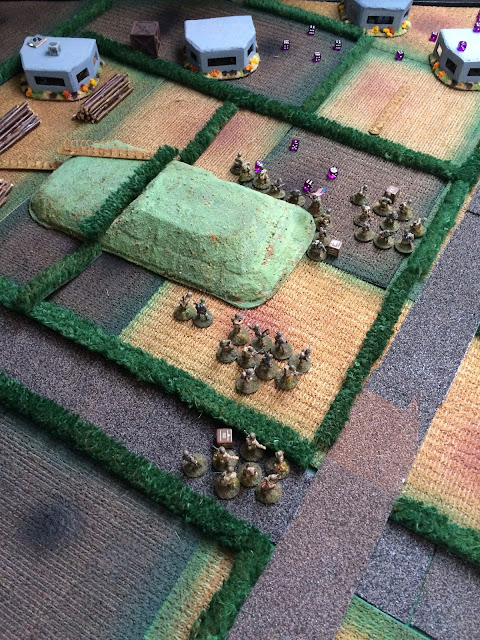 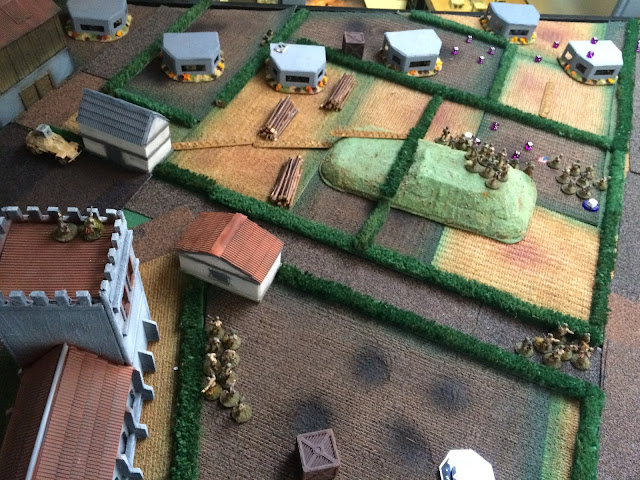 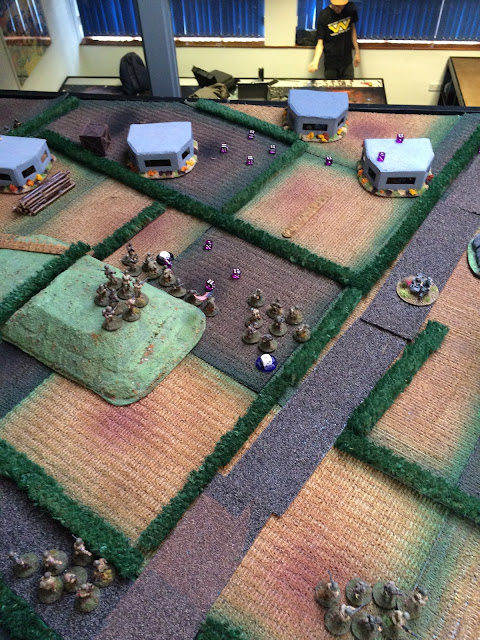 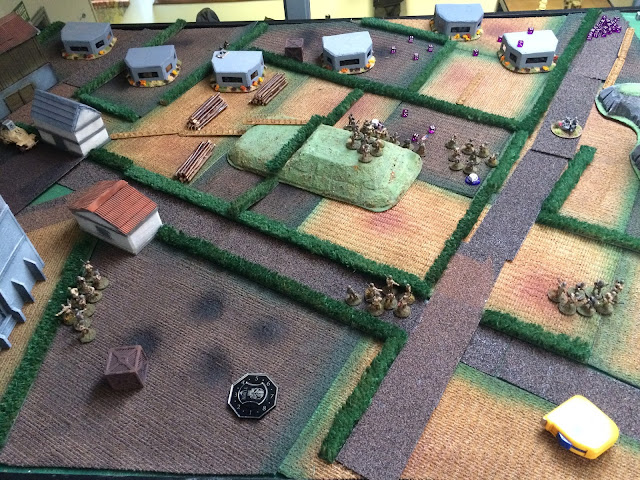 Smoke drifted, the veterans shot the BMW which recce'd away and out of range. The sniper added a second pin on the 222. The 222 failed its order to activate and scurried away. Germans concentrated fire in the centre and added pins everywhere, killing GIs but the 3 units remained resolute, with one squad taking out the sniper spotter. The Schrek team failed to come on, but both officers did, advancing on my left towards the church and my objective, which was a surprise to me, I thought they'd be after the artillery. The squad in bunker 1 advanced out to help support the German near the objective. My officer ran up to join the two veteran squads following the regulars. 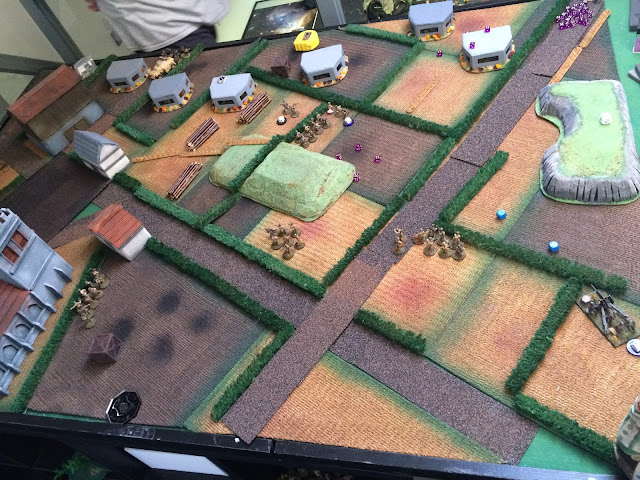 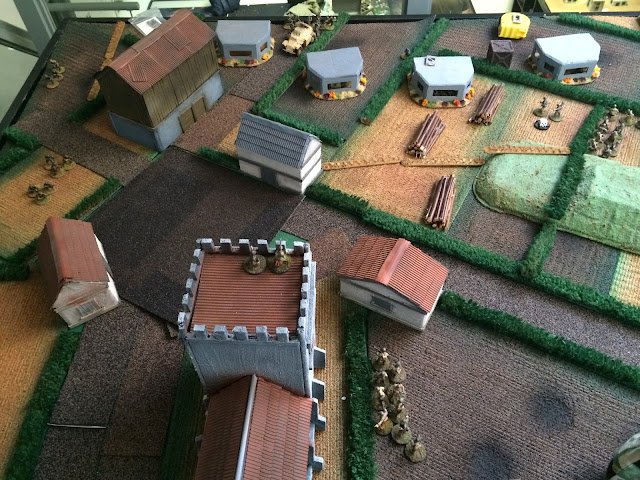 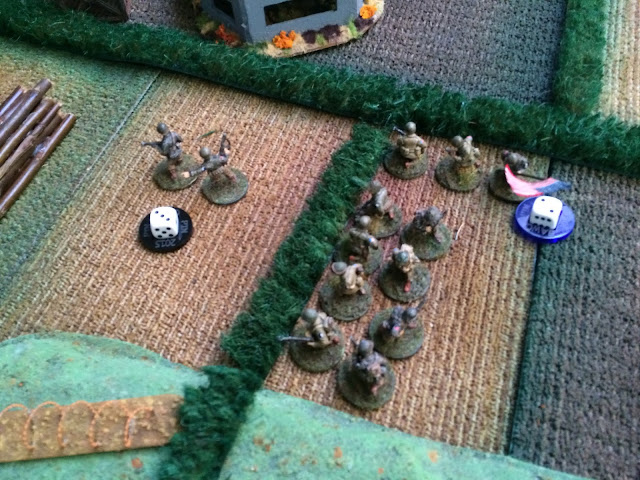 Turn 4 started with my sniper slotting his opposite number, to which a german officer squad advanced to a hedge and firing a long range fusilade at my safely ensconced sniper team in the bell tower. 4 sixes were tolled from 6 shots, but not to worry, 7's were needed. From that four, 3 more 6's were rolled. Still, Keith needed 6's to kill. And got 2... I felt the game had turned then... 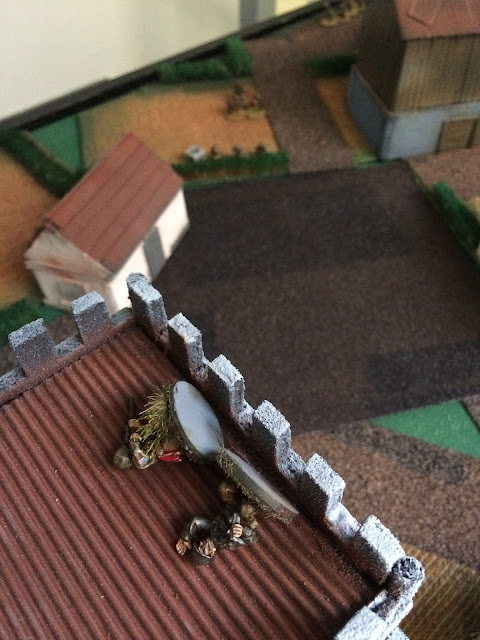 Still, my officers advanced over a hedge and open fire at the BMW which took the shots and exploded. I then advanced despite 3 pins and put 2 remaining GIs on the objective. IF only those inexperienced Kriegsmarine would miss. The 22 failed to order again, the advancing squad missed, the squad in bunker 3 rolled a Fubar and fled outback... Still, the squad in bunker 4 annihilated my GI's on the objective, a light howitzer took care of the smaller other regular squad leaving me with 6 regular GI's near the objective with a pin from bunker 6 shooting. Still, I had a plan, and the second German officer paid for closing in the open as the GIs by the church wiped them out. 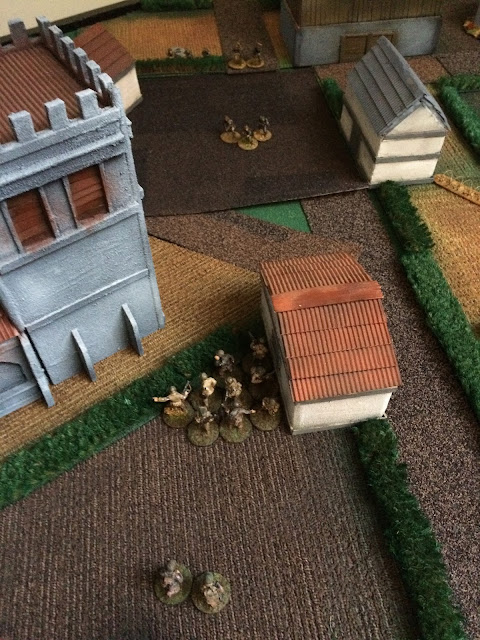 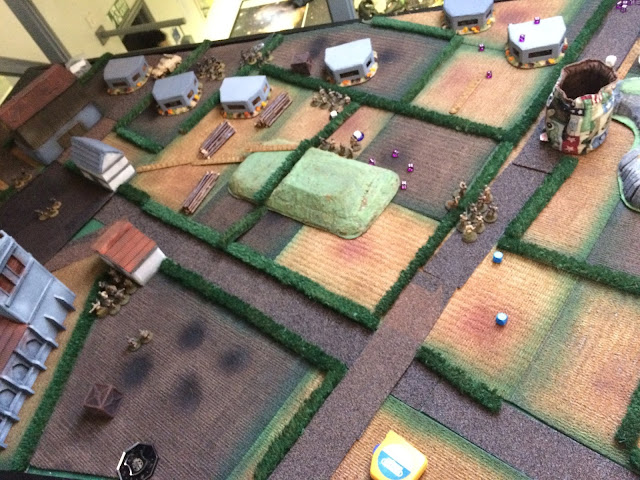 The first part of my plan required the first dice, which I duly got. My GI's with one pin assaulted the retreating Kriegsmarine squad, losing one man on the way in. 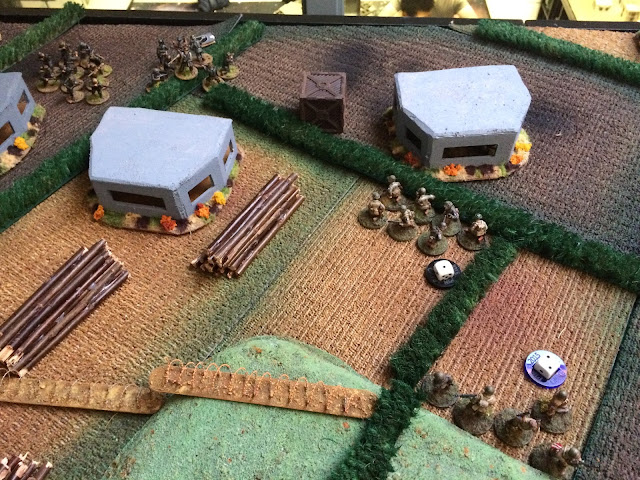 but successfully killing enough to win, although I was down to 3 GI's consolidating onto the objective, and having lost the NCO in the melee. 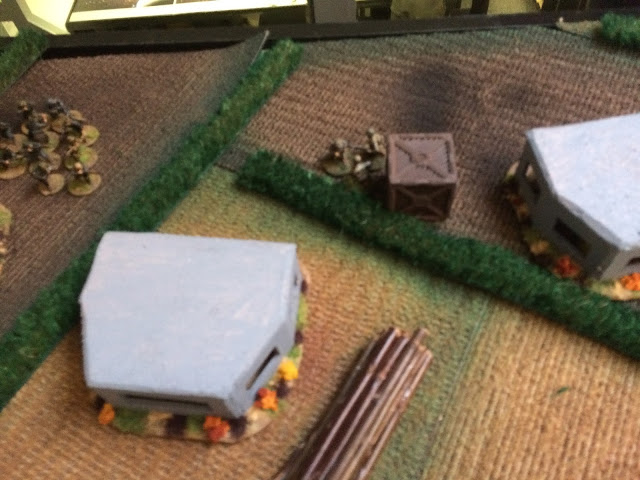 The veterans closed in on the objective too, but they took a hammering from the light howitzers which were out of arc and LOS to hit the unit on the objective. The kriegsmarine squad that had exited bunker 1 opened up, but only succeeded in giving the unit a pin. The squad in bunker 4, firing at point blank, hitting on 3's and killed two men. Despite not having an NCO and with a pair of pins, the lone GI carried out the mission and blew up the objective... 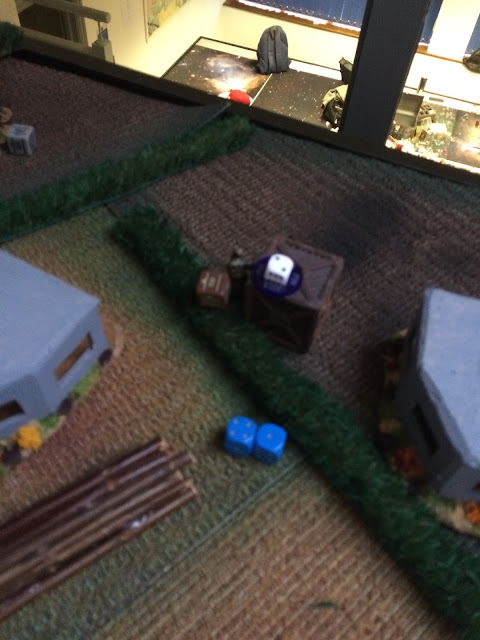 Keith conceded as his sniper killing officer had fubarred and fled and the panzerschrek couldn't get to the objective by the church even if there was a 7th turn. I had achieved a win but my force was spent and had Keith not used all his good dice on my sniper, my force would never have survived (albeit one man) to get anywhere near the objective. It was another cracking game against Keith, and I regret my churlsih nature upon first seeing the bunkers I had to deal with. It is a good defensive list, totally negating my airpower which I didnt use and held back near my objective. It really was a case of running the gauntlet and praying for a miracle, which transpired when the Kreigsmarine in bunker 3 fubar'd and allowed me an assault. So the Allies take Hex EA and march on to the next target,
Posted by Brian McGonigle at 10:21 1 comment: